Christopher volunteers at Squalicum High School as assistant coach for the Cross Country program. In his free time, when he’s not working or running, he likes to take his dogs for a walk or a swim. Now that Christopher has wrapped up his collegiate running career, he’s rediscovering his love for running. A few years back, he was running particularly monotonous mileage through Carlsbad, CA, and as he wrestled with a notably tiring hill, he locked eyes with a Vietnam Veteran (his head adorned in a ‘nam vet cap). The man was clearly struggling to walk down the hill with his walker in hand and a nurse on his shoulder. But when the two locked eyes, they understood that although in very different circumstances, each were laboring against that b@!$# of a hill. As Christopher raised his hand to wave, the man shook off the nurse like Sean Alexander on his way to the 2005 NFL MVP and tossed his walker aside. Startled, Christopher let out an audible, “uh oh.” To his amazement and the nurse’s dismay, the man proceeded to shuffle out to the middle of the road and raise up the single most powerful thumbs up the running world has ever seen. What’s more, he said, “Good work. You can do it!” This moment was hands down the greatest running moment in Christopher’s entire life. This man is the reason Christopher keeps falling in love with running.

A few of Christopher’s favorite things… 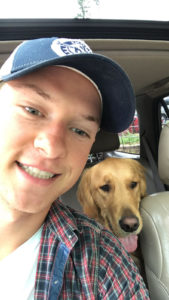